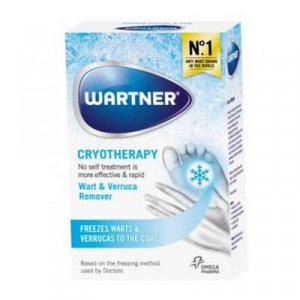 Fast and effective remedy for warts and verrucas, based on the proven Liquid Nitrogen Method used by general practitioners. Wartner freezes the wart on the spot, causing the wart to fall off after only one application, 10 to 14 days later.

Wartner is a form of cryotherapy, which removes warts or verrucas by freezing them. It's based on the same successful freezing method used by doctors, but the freezing agent they use is liquid nitrogen which works at a temperature of -196°C.

Wartner has made cryotherapy available at home, using a different cooling agent, which is a mixture of dimethyl ether and propane (DMEP). This mixture freezes warts and verrucas effectively at a temperature of -57° C.

Wartner is proven to be as effective and safe as liquid nitrogen in the treatment of warts and verrucas.

With Wartner, you can remove common warts and verrucas effectively, safely and at your convenience, using the trusted medical freezing method.

Wartner freezes the wart or verruca to the core in one treatment, causing it to fall off in 10 to 14 days, by which time healthy skin will have formed underneath. Traditional over-the-counter treatments use salicylic acid, however, this process means you need to treat on a daily basis and it can take up to 12 weeks for the wart or verruca to disappear.

Wartner is suitable for the removal of normal viral warts and verrucas of any size, for both adults and children over the age of 4. Repeat the treatment only in persistent cases. This easy-to-use aerosol spray can be used for up to 12 applications.

Extremely flammable aerosol. Pressurised container: may burst if heated. Protect from sunlight and do not expose to temperatures exceeding 50°C. Do not pierce or burn, even after use.

Do not spray on an open flame or other ignition source.

Keep away from heat, hot surfaces, sparks, open flames and other ignition sources. No smoking.

Keep out of the sight and reach of children.

Suitable for external use only.

The applicator should be applied for a maximum of 20 seconds (wart) and 40 seconds (verruca).

Not suitable for diabetics or use during pregnancy.