Driving whilst under the influence of alcohol has long since been known to incur a series of hefty consequences from fines, to driving bans and even prison sentences, depending on the severity of the occasion. However, since 2015 it’s not only alcohol which needs to be out of your system before you get behind the wheel - but a host of different drugs too.

It might seem relatively obvious that some of the higher class drugs come accompanied with some severe consequences when used before driving, but surprisingly, a range of different prescription drugs which are available to purchase over the counter can now see you permanently off the road and even serving time if found in your system whilst driving.

In England and Wales it’s illegal to drive if you are deemed unfit to do so because you’ve taken legal drugs, unless you have been prescribed these drugs and followed specific advice on how to take them by a healthcare professional.

In a more serious capacity, the penalty for causing death by dangerous driving under the influence of drugs is a prison sentence of up to 14 years. Your driving licence will also show you’ve been convicted of drug driving, and this notification will last for 11 years.

Studies and facts about prescription drugs and driving

Simply because drugs are dispensed over the counter, it doesn’t mean they’re exempt from new or existing drug-driving laws. Many medications can cause drowsiness, slow reaction times and affect concentration or vision. A UK-based study from 2000 revealed 5% of car drivers and 4% of motorcyclists killed in road crashes had taken legal medications that could have affected their ability to drive.

Medications that cause drowsiness or otherwise impair driving ability will carry a warning on the packaging and information label. However, a survey by road safety charity Brake and insurance company Direct Line found that one in six drivers admit they ignore warnings not to drive, or even checking the medication’s information leaflet at all.

The awareness of the danger of driving whilst under the influence of drugs has amplified dramatically since the introduction of new roadside drug screening devices which were introduced in March 2015, alongside new driving limits for a string of prescription drugs.

Since then, the number of civilians charged with drug driving has soared 140%, with roughly 4 people a day convicted for offences including being in charge of a vehicle when under the influence of drugs, attempting to drive or causing death after exceeding a legal drug unit. This information comes from a Freedom of Information request by insurance providers Confused.com.

Government statistics reveal that around 19 million prescriptions are written for medicines that are made up of substances included in this new legislation, indeed, over-the-counter drugs including codeine for example, could result in a driving ban if used improperly.

Confused.com stated that this was particularly alarming during specific times of year where hay fever is more prevalent. “More than a third of motorists admit to suffering from hay fever, with many resorting to medication to help combat the symptoms - despite the potential risks of drowsiness and reduced concentration levels”.

Therefore, it’s imperative to understand how to appropriately use necessary prescription drugs without breaking the law. Traces of prescription drugs can remain in the human body for many days, which is precisely why a panel of experts assisted the government in setting levels at which they are likely to impair driving ability upon which the new laws are based.

Of course, the amount of time it will take for drug levels to fall to an acceptable level will depend on various factors, such as a person’s weight, tolerance and the amount of each particular substance is taken.

“Our advice is simple, before taking any medication people should always read the safety leaflet before driving. Or if unsure they should ask the pharmacist or err on the side of caution and don’t drive, as road safety for themselves and others should be a top priority for any driver” continued the experts at Confused.com.

There should be no need to stop taking prescribed medication, but there is a need to make sure you’re taking it exactly as prescribed by your doctor, health professional or on the packaging, and refraining from driving at any point if you feel drowsy.

Prescription drugs which could result in a driving offence*

Methadone
Used to treat addiction to opioids (such as heroin).

If your prescribed medication includes drugs on the restricted list featured above, you are eligible for what is known as a ‘Medical Defence’. The government is advising that anyone who is taking prescription medicines covered by the new law that it would be ‘helpful for you to keep some evidence of this with you in case you’re stopped by the police’. You can obtain a letter from your doctor confirming your legitimate use of the drug and dosage required, which will help to protect you for any eventualities should you get pulled over by the police. However, you should always make an appointment with a doctor or a health professional to discuss the dosage of the drug you are taking, and to fully understand the implications of your prescribed drug on your driving ability. In some cases, it may be necessary to reduce or modify the amount of said drug that you take.

If you exceed the dose prescribed by your doctor or health professional, you will no longer be able to use the aforementioned medical defence, making it likely that you could be open to prosecution under the new legislation.

Prescription drugs are imperative to the lives of many people, and by no means should any individual stop taking any drugs which are imperative to their quality of life in order to drive. As long as you’ve consulted your doctor or healthcare professional, understand the implications and side effects of your legal drug and understand when it’s ok to drive safely, then it should be no trouble to continue with your prescription drugs and driving in a safe and secure manner.

All of the above mentioned prescription drugs are readily available for you to purchase or pick up at Weldricks Pharmacy, where we will happily provide you with any advice on how to use them safely and implement them into your life so that you can still drive without worry or stress. 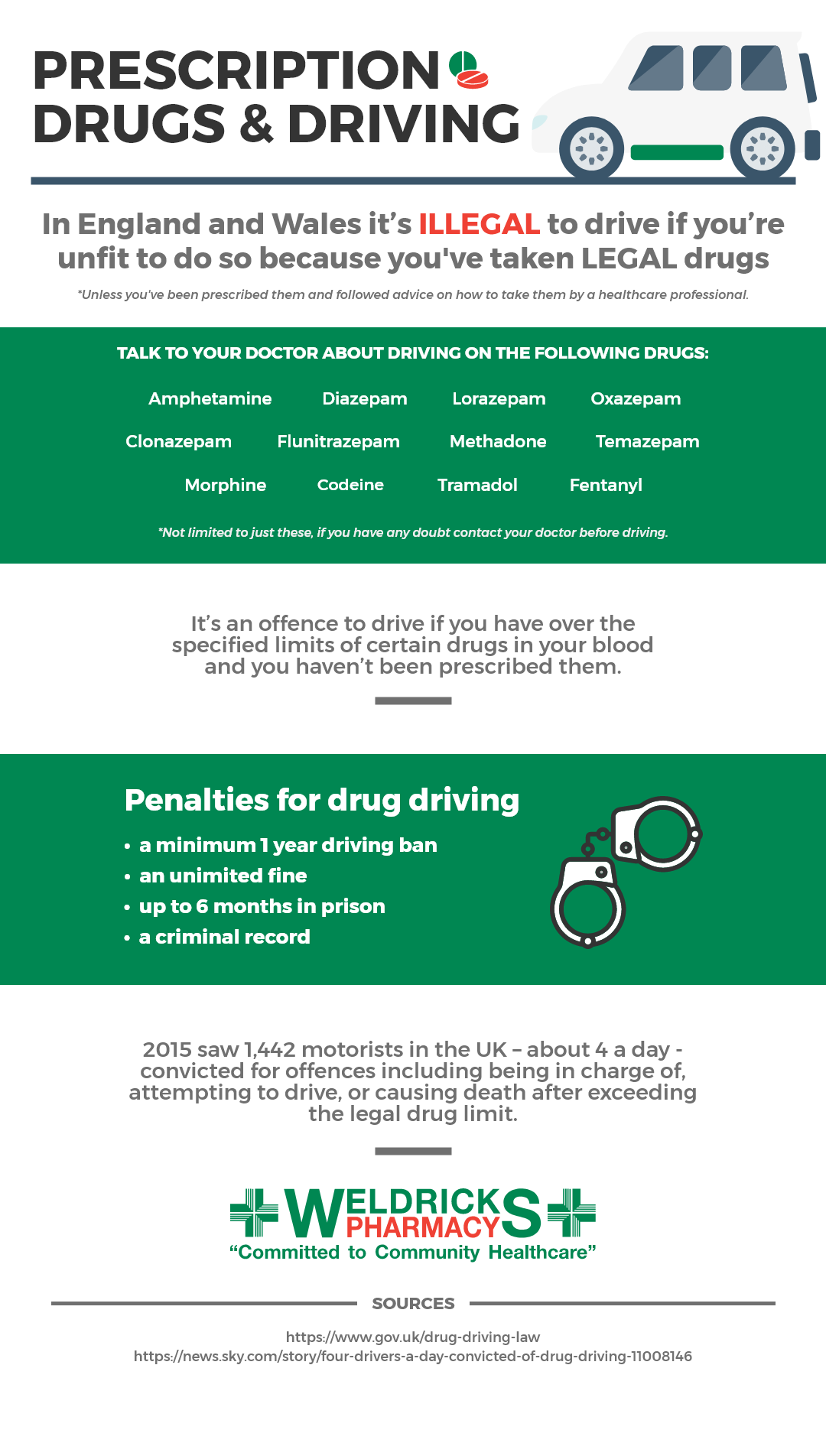