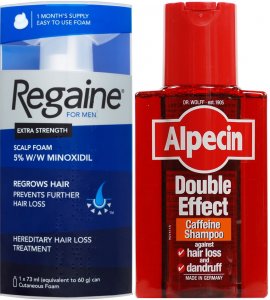 When it comes to a hair loss treatment for men, there's nothing quite like Regaine Foam.  Regaine Foam contains 5% minoxidil - and in clinical testing, Regaine Foam re-grew hair in 85% of men after 4 months when used twice daily.  Because it's a foam, there is no hassle and no mess. It goes on easy and dries quickly. So your daily routine is never interrupted.

The most common cause of hair loss in men and women is androgenetic alopecia (AGA). Heredity, hormones and age all play a part in this condition.  In AGA the genes and hormones in your body have a shrinking effect on your hair follicles, making them ineffective at growing new hairs.

Minoxidil, the active ingredient in Regaine, reinvigorates shrunken hair follicles - they increase in size and regrow thicker hair over time.

What Do Expect From Regaine Foam?

Here are some things you can expect to notice as you begin your Regaine routine:

Above all, keep up your routine. Because real success doesn't happen overnight.

Apply Regaine directly to your scalp - twice a day, every day.  It goes on easy and dries quickly.

Alpecin Double Effect Shampoo loosens scaly, keratinous cells and thoroughly removes dandruff from the scalp. This clears the way for the caffeine complex: In the second step, the active ingredients penetrate into the hair root and strengthen it against hereditary hair loss.

How does dandruff occur?

A very long time ago, sebum was meant to waterproof the hair and skin and protect humans from the cold. Since humans wear clothes, this function has become superfluous. In addition, germs and microorganisms that naturally occur on the skin use sebum as a source of nutrition. Degradation products of sebum irritate the skin, make it itch and accelerate the formation of the keratinous layer. The consequence is dandruff. Due to subsequently released sebum, these skin cells stick together to form large, visible skin flakes.

Based on an excess of testosterone, which begins during puberty, hair may fall out prematurely. As a result, many men notice hereditary hair loss early on. The hair root is hypersensitive to the hormone dihydrotestosterone (DHT). It weakens the hair roots and prematurely renders them inactive. This shortens their growth phases and terminates their lifetime prematurely. If more and more hair roots die in this manner, baldness will ensue.

How to use Regaine Foam For Men:

How to use Alpecin Double Effect Shampoo:

Do not use Regaine Foam For Men if you: 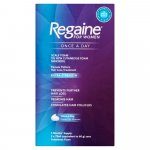 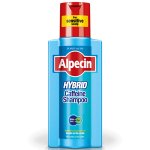 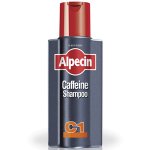 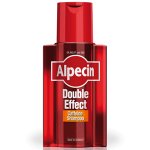